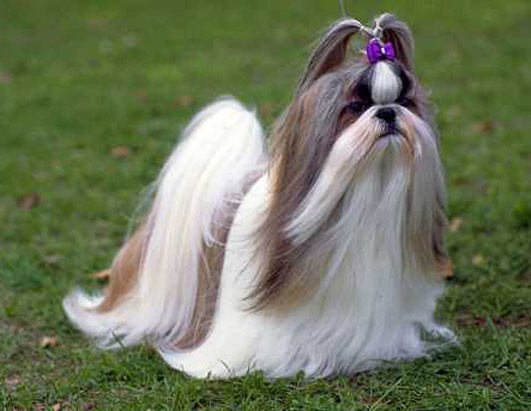 The Shih Tzu is a very small dog breed that is incredibly loyal and comes from a long royal heritage. By nature they are bold, affectionate and energetic. They are prized for their appearance and intelligence, and continue to be an excellent companion for both an individual and a family.

A Shih Tzu has plenty of spunk and is very alert. He makes friends easily and enjoys barking. He can prove to be quite stubborn at times, but overall is good natured and loves to please his owner. Shih Tzus make wonderful prized pets, and they have a history to prove it.

History of the Shih Tzu

Shih Tzu dog has been around since well before the 16 th century. Proof of this can be found in historical artwork that depicts these dogs and dates back to this time period. The dogs in the artwork resembled small lions. The term “small lion” is what was sometimes used to describe a Shih Tzu.

However, despite their presence in the 16 th century, Shih Tzus are said to have been developed in the forbidden city of Peking during the 17 th century. It is believed that the breed was the result of crossing the Tibetan Lhasa Apso with a Pekingese. Regardless of what actually happened, there is no doubt that the Shih Tzu became an instant favorite among China’s Imperial court. In fact, Shih Tzus were so prized in China that the Chinese refused to trade or sell these dogs throughout their negotiations with the West.

Eventually, as times changed, so did the attitudes of China. Finally, in 1930, the first pair of Shih Tzus was imported to England. 16 years later in 1946, Britain recognized the breed. However, it wasn’t until 1969 that the United States acknowledged the standard.

The Shih Tzu has maintained his popularity today, and has proved to be both a wonderful companion and a champion show dog.

The Shih Tzu is a member of the Toy and Herding dog group. This means they are small and lively dogs that are extremely loveable. Shih Tzus are a very small breed that weigh between 9 – 16 pounds, and stand up to 11 inches at the shoulders.

The Shih Tzu likes to bark, especially to alert their family of strangers. This makes them excellent watchdogs. However, despite the fact that they make ideal watchdogs, they are quite friendly and sociable, and are generally good with other pets.

Shih tzus make good family pets, but they do best with children who are older and polite. They will not tolerate teasing, or unintentional abuse from small children.

Do you like to brush hair? If not, this breed isn’t for you. The Shih Tzu requires daily brushing, as his long coat easily mats. On the plus side, this breed does not shed, but he will require coat cuts every few months.

The Shih Tzu will adapt well to apartment life and will be very active indoors. That being said, this breed still requires plenty of outdoor exercise and will enjoy a nice walk. They should be taken out for at least one decent walk (approx 15 min) every day.

The Shih Tzu has a good life span and lives an average of 15 years or more. However, you should be aware that Shihs do suffer from certain hereditary health issues such as ear, eyes and respiratory problems. They should be monitored for these illnesses.

Shih Tzus are an intelligent breed, but they can be stubborn when it comes to traninig. However, with the right care, and gentle teaching they will excel at learning. In fact, the Shih Tzu dog is frequently a champion show dog.

A Shih Tzu is a wonderful choice for the first time dog owner, or for anyone interested in a small companion to share their time and affection with.