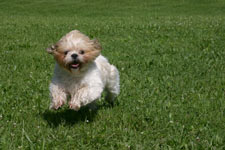 If you are introducing your Shih Tzu puppy to your home and you already have another dog, you may run into some problems. What kind of problems? Your two canines may experience:

All of the above issues are related to canine rivalry.

What is canine rivalry? Canine rivalry occurs when there is a conflict with the hierarchy of dogs that live within a household. You see, it is a dog’s natural instinct to determine their place and your place within the home based on a social structure. As a Shih Tzu puppy, your dog should be taught that you and the humans in your family come before their wants and needs. This shows the dog that as the owner, you are the head of the pack and top of the hierarchy. Unfortunately, when you have more than one dog, a conflict will occur between them until it is made clear to both who is the more dominant, and comes first.

Why does conflict happen? There are a number of reasons, the most common including:

How do dogs establish dominance? Dogs will display a variety of different behaviors when they are exercising dominance. Some of the more common dominance behaviors you may witness include:

A dog who is showing extreme dominance may act aggressively towards the other dog. In this case, you should speak to your vet and consider consulting a behavior expert to help break the aggression from your dog.

What should you do about conflict? First and for most, don’t get directly involved. Remember, while this behavior may seem unpleasant to you, it’s natural to the dogs, even to your Shih Tzu puppy. Therefore, don’t think that if you pay your dogs equal attention, or stop another dog from asserting his status over the other that it will make a difference. In actuality, your efforts to try and help the dogs this way may only be counter productive.

Your job in this situation is to ensure your dogs don’t fight in a way that is dangerous to their or your children’s wellbeing. If your dogs do fight, don’t try to break them apart by stepping between them, this is a sure way to get bitten by accident. Instead, squirt them in the face with water to show them who’s boss, and to calm them down. Then seek the help of a behavioral expert to properly socialize your Shih Tzu puppy and other dog together.

Finally, never lose your status as the pack leader. Your dogs must know at all times that you are the one in charge. If you cannot display your own dominance and control over your dogs and Shih Tzu puppy, you’ll have major problems. 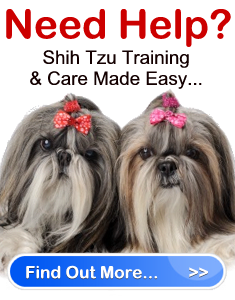